your mansion for example …

the most beautiful jewel ?

The most amazing jewel for your home
Our Burgundy stones

The most amazing jewel for your home
Our Burgundy stones

You are very numerous to question us on these 2 terms, here is some information that may be useful to you in your choice:

The reconstituted stone… you said “stone”?

“Reconstituted stone” is an abusive and misleading denomination used by almost every manufacturer to make the consumer believe that he buys natural stone, that is not true.

Finally what is the so-called “reconstituted stone”?

These “reconstituted” products (which would be preferable to name “false stone”) are a mixture of:
granulates of stones (gravel, crushed, pebbles)
+ sands
+ binders (cement generally)
+ adjuvants (resins, adhesives from the petro-chemical industry)
+ dyes
+ water

= So it’s concrete>, so far from the natural stone so touted…

These products are mixed in concrete mixers and cast in moulds.
The moulds are then vibrated to remove the air bubbles from the concrete mixture and then are dried.
This process allows to reproduce in series and identical an element derived from an original moulding (usually the original is made of natural stone).

Its resistance to outdoor weather is hardly appreciable and varies according to the manufacturing process of each brand.
Unlike natural stone, false stone products do not crystallization and do not produce their natural cullet (calcium carbonate) which is the natural process of protecting limestone natural stone.

And don’t forget that the manufacture of cement (main constituent of mortars and concretes) by its particularly energy-consuming mode of production, in particular cooking at very high temperatures, is one of the major contributors to the greenhouse effect and to the air pollution.

It is a limestone of freshwater sedimentation.
It is recognizable thanks to its numerous holes.

Where did it come from?

Turkey is the main producer-exporting country in the world.
It has for 15 years supplanted Italy, of which many famous buildings are erected in travertine.

Why is it so cheap?

Extraction and production techniques in Turkey are roughly the same as in Burgundy.

The first difference is: the Turkish State, by heavily subsidizing the travertine stone production sector to settle for export (as the Chinese State for solar sector in China which everyone has heard about) has allowed to endorse the principles of standardization and “globalization of consumption”. Direct consequence: the low prices and the uniformity of the finishes and the formats proposed in travertine.

The other notable differences between the methods of extraction/production of travertine compared to the stone of Burgundy are:
– the costs of opening and operating quarries and the lack of obligation to refurbishing quarries after extraction,…
– lack of environmental standards (waste reprocessing, water reprocessing,…)
– the low cost of salaries and social taxations,
– safety at work,…
All these elements involve costs of at least 3 to 5 times lower than in Burgundy.

And the quality in all this?

The Turkish travertine has the particularity to offer several qualitative options:
-the 1stchoice (difficult to find because very few holes: the most expensive)
-the 2nd choice (most common choice in France with serious dealers)
-the 3rd choice “when it’s cheap, it’s the third choice“. On can recognize it through the presence of faults and holes in very large quantities (which must be clogged with mortar when laying). 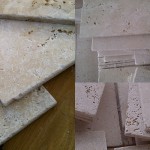 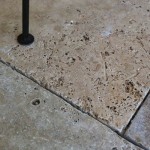 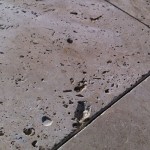 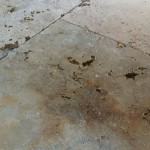 In any case, always check the quality of all the slabs in the pallets of your order.

The Comptoir des Pierres participates in the creation of the geographical indication for the stone of Burgundy.
This will allow you, in a few months, to be sure of the provenance (traceability) and the quality “Pierres de Bourgogne” by bringing you the guarantee of products exclusively made in Burgundy by controlled and certified manufacturers.

Back to top
During the processing of your order, from its validation until delivery to your home or the chosen location, you benefit from a follow-up with an appointed interlocutor and a direct call number. Before shipping our sink, washbasin, shower tray, kitchen worktops,... in Burgundy limestone you will receive photos that allow you to validate the compliance of your order. We then make sure that your goods arrive safely.

The Burgundy limestone products we manufacture for you are submitted to rigorous quality monitoring and control points throughout the manufacturing process. Each of your custom order is validated by production plans prior to manufacturing. Before shipping your sink, washbasin, shower tray, kitchen worktop,...  you receive photos that allow you to validate the compliance of your order. We then make sure that your orders arrive safely.

Our products (sinks, washbasins, paving stones, fountains,...) are delivered everywhere in France and Europe by 19-ton trucks with tailgate, 40-ton semi-trailer, or 30-ton trucks equipped with crane. Our packaging is secure to ensure you receive your Burgundy limestone order without damage. We deliver everywhere in France and Europe. Pickup at our workshop for any other destination... >> Read more

Good evening Everything was perfect from A to Z, and I managed the fixing without difficulties. Congratulations to your company and the level of professionalism of the staff Best regards L’article Jean-Pierre C. – 37 – Sink est apparu en premier sur Le Comptoir des Pierres. >> Read the review

Hello As agreed, Please find attached a picture of our sink (one of your creations) in situ; everyday use is very pleasant, we do not regret our investment. Kind regards Pascal C. L’article Pascal C. – 44 – Sink est apparu en premier sur Le Comptoir des Pierres. >> Read the review

Hello, yes we were very pleased with your welcome and the quality of stone work We have not yet laid the sink, it is planned for the month of August so I will send you a picture of the sink Kind regards Pam P. L’article Pam P. – Sink est apparu en premier sur Le Comptoir des Pierres. >> Read the review

Hello I was very satisfied with all the services provided. Both by kindness and by the professionalism of every interlocutor in your company. As for the quality of the sink it is absolutely “amazing”! Kind regards Sylvie F. L’article Sylvie F. – 83 – Sink est apparu en premier sur Le Comptoir des Pierres. >> Read the review

Hello the quality is well present: the paving in old slab is beautiful, my friends give me compliments and wonder where I have found it. The sink is up to our expectations, wide enough and easy to maintain. Only the delivery of the sink was a little laborious, but soon forgotten. A. Riviére L’article Paving + Sink – A.Rivière – Switzerland est apparu en premier sur Le Comptoir des Pierres. >> Read the review

Hello We are pleased with the services and follow-up that you have offered us. I send you a picture to view the final aspect that is really nice Sincerely (and may be see you soon) L’article Sink and splashback – David Germany est apparu en premier sur Le Comptoir des Pierres. >> Read the review

Hello For me everything was fine, your products are gorgeous and you answer questions quickly. The only drawbacks are the waiting time to receive the tap and the delivery of the sink on the sidewalk, without any help (when you live on the 5th floor without elevator it’s kind of difficult), but you warned me.... L’article Peggy P – Paris – France – Sink + tap est apparu en premier sur Le Comptoir des Pierres. >> Read the review

Hi, For a first order, all the process was really good from the first meeting to the delivery. It would be a pleasure to do another project together. Matthieu GILBERT L’article Gilbert M – Lyon – 69 – Frames est apparu en premier sur Le Comptoir des Pierres. >> Read the review